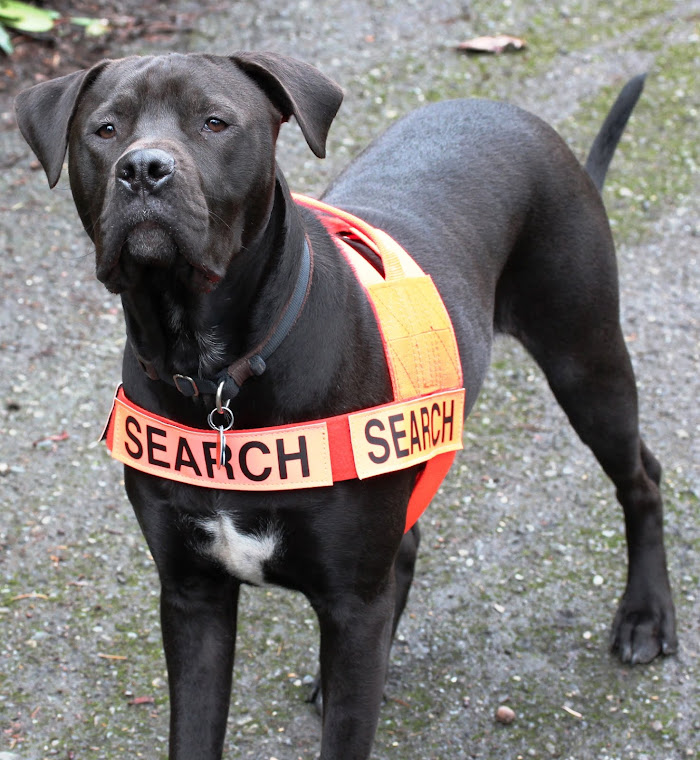 Komu was born about December 21st, 2010.  I first heard about him when he was six months old.  He was chained to a tree in Lakewood, WA, and he was being fed by the office workers next to his yard because his owners would not feed him.  A volunteer of Missing Pet Partnership, Jessica, asked me if I could do anything to help, so I went to take a look.  Looking into his eyes, I knew I had to help him if at all possible.  His collar was obviously too tight.  His chain was wrapped around the base of a shrub, and he was pinned down, unable to move much at all. 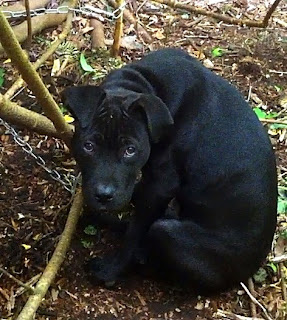 I didn't have much of a plan, but I went to the front door to talk to his owners.  I said something like, "I was at the office building next door and I heard your dog crying.  His chain seems to be caught on the shrubs, and I was just wondering if I could help him at all."  They unhooked him and brought him to the front door.  In spite of the way they abused him, he seemed remarkably happy and friendly.  They said they didn't have time for him, and they wanted to sell him for $100.  I showed them the $75 I had in my pocket, and they said they would think about it.  I should have gone to the ATM right then, if I was thinking straight.  Instead, when I called back, they said he was sold.  Jessica called them, identifying herself as a volunteer from MPP, and they told her he had been sold.  Vashti, of Saving Great Animals, called in response to their craigslist ad offering him for sale, and she did not identify herself as being affiliated with any organization.  The agreed to sell him for a hundred dollars.  I brought the money and stayed out of sight as Vashti met them in a park and bought the poor puppy from these people.  The puppy was free from his chain. 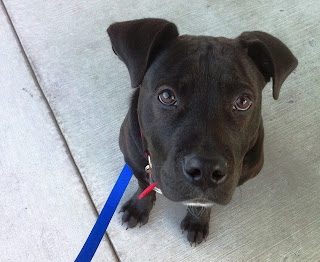 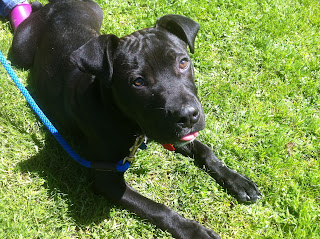 I took him to the vet to be checked out.  They said he seemed to be in reasonable health.  Jessica and I took him to Petsmart to get a collar and a tag.  At the tag engraving machine, I asked Jessica what name we should put on the tag.  I suggested Ruggles, but she didn't care for that.  I suggested Mocha, and she liked that better.  When it came time to engrave a phone number, we had to decide where he was going to stay.  I had three dogs at the time, and I knew Kelsy would not be happy about a puppy.  Jessica had cats, and she didn't really have time for a puppy, but she decided her number should go on the tag, and she offered to take him home.  Mocha lived with Jessica for two months, and his name became Wakomu, which is Chippewa for Family.  Jessica called him Komu for short.  Komu loved living with Jessica, but life was not easy.  He chased the cats, although just playfully.  He broke into the house by jumping through a window screen.  He needed someone to look in on him in the middle of the day because Jessica worked long hours.  Finally, Jessica and I decided to try him at my house to see how he fit in.

He did not fit in.  He had a grand time harassing the other dogs, but they weren't happy.  I had to keep him on a leash inside the house so he wouldn't wander off and destroy something.  The time from eight months to twelve months was an ordeal.  He had extreme separation anxiety.  He had food issues.  Although he had been housebroken at Jessica's house, he decided he wasn't housebroken after all.  We had fun, as you might expect with a puppy, but those four months were not happy overall.

When he turned one year old, we evaluated him for finding missing pets.  He showed great enthusiasm and aptitude for finding both cats and dogs.  Since Kelsy already had the position of dog finder, I decided to train him for finding cats.  This training really focused his energies and made him much easier to live with.  Komu has always loved his training, and his work.  He learned quickly, and he was a pleasure to work with.  He could be a menace to society any other time, but once the vest went on, he was ready to work.  He responded to commands, went everywhere I asked him to, and showed an ability to detect a cat as successfully as any other dog I had worked with.  The first time we took the certification test was the first time in six months of training that he failed to give an alert on the hidden cat.  I blame it on the heat, the windless conditions, and the approach I took.  It was not his fault.  We took the certification test another day, and he passed with flying colors. 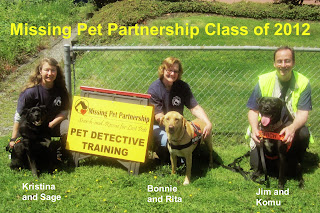 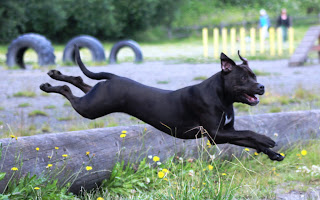 From May of 2012 to May of 2015, Komu has conducted at least 200 searches for missing cats.  He has found remains of the deceased cat about 50 times.  He has found the missing cat alive about 25 times, according to my records.  There may have been a few instances where he did locate the missing cat, but it darted off as we were approaching, and the cat was found in the next 24 hours.  Komu has worked long hours in the heat, rain, wind, in blackberries, steep ravines, and yards filled with junk and debris.  He is a most excellent dog in any number of ways.

On November 8th, 2012, I trapped a little white poodle that had been runnng loose on the freeway.  I tried to find his owners, but his name became Fozzie, and he became part of our pack.  Every single day for the past several years, Komu and Fozzie have played together for hours.  Fozzie started at 11 pounds and has grown to 14 pounds.  He throws himself at 75-pound Komu with the viciousness of a wolverine.  Komu gets a squeaky toy in his mouth and squeaks it at Fozzie to egg him on.  For many hours every day, it's Rarrr, Rrarrr, Rrraaarrr, Squeak, Squeak, Squeak.  Fozzie lunges at Komu, and Komu zooms down the hall, through the living room, bounces off the couch, and races back to Fozzie with a play bow and a squeak squeak.  Other times they wrestle more gently.  Komu will lie on his back to get lower than Fozzie while Fozzie bites him all over with little puppy bites and soft growls.  Komu has his own little puppy, his little play toy.

Komu is not a perfect dog.  He has stolen a box of cookies, half a tub of margarine, several partial boxes of dog treats, and many other food items that weren't adequately placed out of reach.  He has learned to climb on things in search of food, so there are fewer and fewer surfaces safe from the marauder.  Komu will also bark at an inappropriate time.  I don't mind if he barks, but sometimes he will bark at a perfectly innocent child or dog at just the wrong moment.  Also, when people greet him and try to pet him on the head, he will open his jaws in a gesture that appears menacing but is not.  This is the fault of the people who try to stick their hands on the top of his head, instead of stroking him under the chin, but it would be nice if I didn't have to worry about him scaring people.  With all of his imperfections, he really is a perfect dog.  I wouldn't want him to be too civilized.  Life with Komu is never boring.

Once you get to know him, Komu is the most affectionate, cuddliest dog you could ever hope to meet.  He sleeps in the bed next to Kelsy and me.  He will curl up on the couch with anyone he can.  With his fearsome jaw and muscular build, he is still capable of such sweet and tender gestures.  He can look at you with soft eyes, and you know he is saying that he loves you.  I am extremely fortunate to have Komu in my life.  I tried not to get stuck with him, thinking he was too much work for my current situation, but I am lucky that he bombed out at Jessica's house.  I can't imagine life without Komu.  He is an excellent working partner, a fine companion, smart, graceful, athletic, sweet, everything you could possibly want in a dog, or a person for that matter.  The little unwanted puppy chained to a tree has become a member of my family, a valuable contributor to society, helping people find their missing cats.  I love my work because I love to help animals, but I am especially proud of my work when people get to see Komu working, using his skills and abilities to help lost kitties. 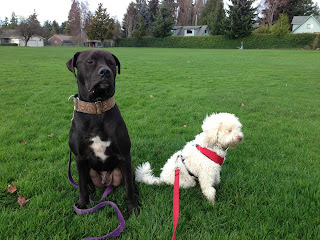 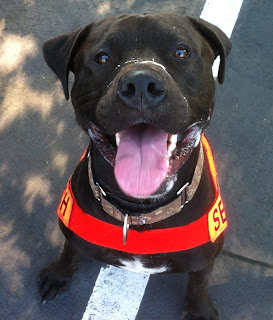 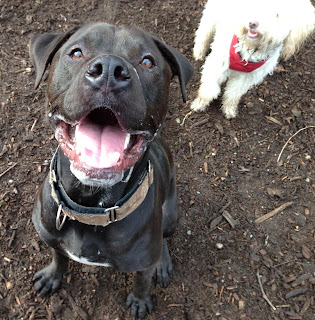 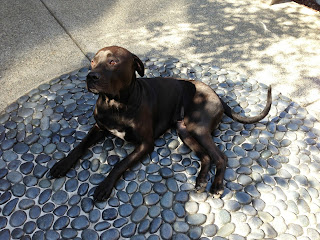 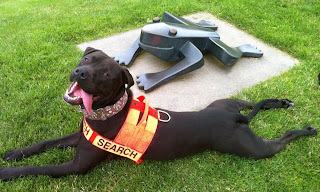